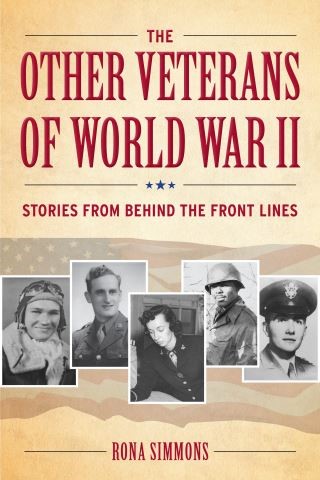 The Other Veterans of World War II

Stories from Behind the Front Lines

The untold stories of troops serving miles away from front lines

For decades, the dramatic stories of World War II soldiers have been the stuff of memoirs, interviews, novels, documentaries, and feature films. Yet the men and women who served in less visible roles, never engaging in physical combat, have received scant attention.

Convinced that their depiction as pencil pushers, grease monkeys, or cowards was far from the truth, Rona Simmons embarked on a quest to discover the real story from the noncombat veterans themselves. She sat across from 19 veterans or their children, read their letters and journals, looked at photos, and touched their mementos: pieces of shrapnel, a Japanese sword, a porcelain tea set, a pair of wooden shoes, a marquisette wedding gown.

Compiling these veterans’ stories, Simmons follows them as they report for service, complete their training, and often ship out to stations thousands of miles from home. She shares their dreams to see combat and disappointment at receiving noncombat positions, as well as their selflessness and yearning for home. Ultimately, Simmons finds the noncombat veterans had far more in common with the front line soldiers than differences.

Simmons’s extensive research gives us a more complete picture of the war effort, bringing long-overdue appreciation for the men and women whose everyday tasks, unexpected acts of sacrifice, and faith and humor contributed mightily to the ultimate outcome of World War II.

Rona Simmons: Rona Simmons has written both novels and works of historical fiction. She coauthored Images from World War II, celebrating the art of WWII veteran and artist Jack Smith. The daughter of a World War II fighter pilot herself, she is proud to honor veterans and their stories through her work. Her stories, articles, and interviews have appeared in regional and national literary journals and online magazines.