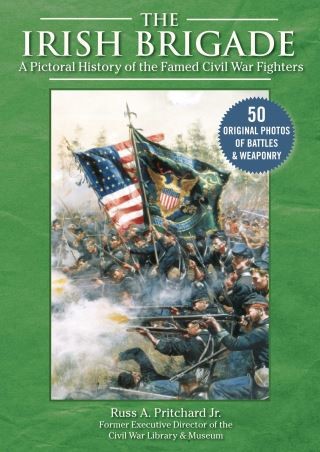 A Pictorial History of the Famed Civil War Fighters

A Full-Color History for Civil War Enthusiasts, History Buffs, and Anyone Interested in the Saga of the Irish in America!

The Union’s Irish Brigade, the Civil War’s most famous fighting outfit, built an unusual reputation for dash and gallantry having fought throughout the war, from First Bull Run in 1861 to the Confederate surrender and Appomattox Court House in 1865. Here is the gripping true story, replete with stunning full-color illustrations, of all Irish regiments from Pennsylvania, Massachusetts, and New York serving under the direction of the Brigade’s most famous commander, General Thomas Francis Meagher.

This meticulously researched text features complete and detailed accounts of the Brigade’s battles and skirmishes, from Bull Run to Yorktown to Peach Orchard to Malvern Hill to Antietam to Petersburg—to name a few. This powerful, authoritative volume captures the heart and tireless effort of the heroic men who rescued the Union from defeat time and time again—enthralling reading with authentic accompanying illustrations that will fascinate everyone from the biggest history buffs to the occasional layman interested in the history of Irish-Americans or the Civil War.

Russ A. Pritchard: Russ A. Pritchard, Jr. is a leading expert on the Irish Brigade. Having graduated from the Choate School in Wallingford, CT, and Washington and Lee University in Lexington, VA, he set out on a spectacular career, operating as Executive Director of the Civil War Library and Museum from 1976 through 1995. He is the author of Civil War Weapons and Equipment (2003), as well as a contributor to The Civil War Reenactors’ Encyclopedia (2002).