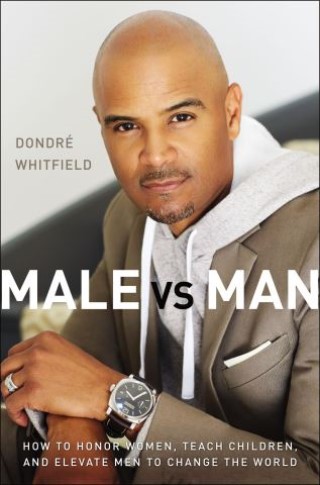 How to Honor Women, Teach Children, and Elevate Men to Change the World

Males look to be served. Men look to be of service. Emmy Award–nominated actor best known for his role on Queen Sugar and transformational speaker Dondré Whitfield challenges us to be real men in this provocative look at the power found in serving others.

Too many males abuse the power they have.

Often those males grow up without healthy role models and so, while they look like men, they act like boys. Only now there are adult consequences to their actions.

And many of us are caught in the shifting cultural ideas about manhood, unsure of how to make sound decisions or truly be a man. Every day we find evidence that the role of men at home, at work, and out in the world is deeply misinterpreted.

In Male vs. Man, Dondré Whitfield equips us to become men rather than simply "grown males." Men are healthy and productive servant-leaders who bring positive change to their communities. Males are self-serving and stuck in negative cycles that we hear and read about daily. They create chaos instead of cultivating calm.

Male vs. Man is an uplifting playbook for men who want to level up. It will help men and women alike understand what real manhood is, based on biblical wisdom as well as hard-earned lessons from someone who has been there. With practical guidance and a strong spiritual foundation, Dondré shows how to cultivate the life-changing spiritual, emotional, and psychological attributes of servant leadership at home, at work, and in our communities.

Veteran actor Dondré Whitfield is a three-time Emmy and NAACP Image award nominee. He has appeared with such celebrated actors as John Travolta, Helen Mirren, David Oyelowo, Michael B. Jordan and Kevin Hart among many others.

Off-camera, Whitfield is passionate about helping address the challenges and pressures of masculine identity in the 21st century. He co-created The Manhood Tour, a global movement committed to awakening the consciousness of men, giving them the keys to effective and impactful leadership, and teaching them how to tap into their talents and live to the highest degree.  He has traveled throughout the country speaking on behalf of the movement, inspiring youth to overcome distractions and modeling for young men and peers the concept of servant leadership and what it truly means to “be a man.” He is currently Ambassador for Delta Airlines’ annual Dream Flight and Ambassador for the PGA’s Beyond the Green mentoring program for youth and college students.

Whitfield and his wife, actress and director Salli Richardson-Whitfield, live in Los Angeles with their two children.