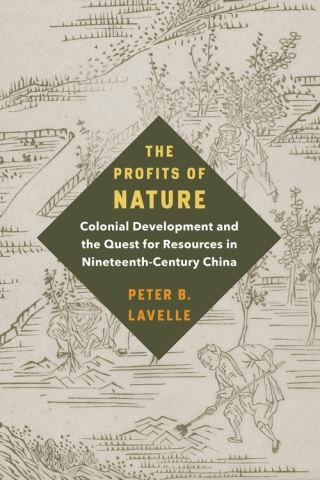 The Profits of Nature

Colonial Development and the Quest for Resources in Nineteenth-Century China

In the nineteenth century, the Qing empire experienced a period of profound turmoil caused by an unprecedented conjunction of natural disasters, domestic rebellions, and foreign incursions. The imperial government responded to these calamities by introducing an array of new policies and institutions to bolster its power across its massive territories. In the process, Qing officials launched campaigns for natural resource development, seeking to take advantage of the unexploited lands, waters, and minerals of the empire’s vast hinterlands and borderlands.

In this book, Peter B. Lavelle uses the life and career of Chinese statesman Zuo Zongtang (1812–1885) as a lens to explore the environmental history of this era. Although known for his pacification campaigns against rebel movements, Zuo was at the forefront of the nineteenth-century quest for natural resources. Influenced by his knowledge of nature, geography, and technology, he created government bureaus and oversaw state-funded projects to improve agriculture, sericulture, and other industries in territories across the empire. His work forged new patterns of colonial development in the Qing empire’s northwest borderlands, including Xinjiang, at a time when other empires were scrambling to secure access to resources around the globe. Weaving a narrative across the span of Zuo’s lifetime, The Profits of Nature offers a unique approach to understanding the dynamic relationship among social crises, colonialism, and the natural world during a critical juncture in Chinese history, between the high tide of imperial power in the eighteenth century and the challenges of modern state-building in the twentieth century.