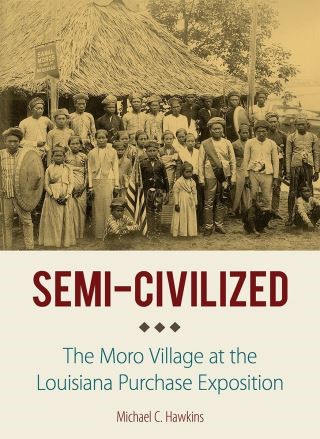 The Moro Village at the Louisiana Purchase Exposition

By reviving and contextualizing Moro participation in the exposition, Hawkins challenges the typical manifestations of empire drawn from the fair and delivers a nuanced and textured vision of the nature of American imperial discourse. In Semi-Civilized Hawkins argues that the Moro display provided a distinctive liminal space in the dialectical relationship between civilization and savagery at the fair. The Moros offered a transcultural bridge. Through their official yet nondescript designation as "semi-civilized," they undermined and mediated the various binaries structuring the exposition. As Hawkins demonstrates, this mediation represented an unexpectedly welcomed challenge to the binary logic and discomfort of the display.

As Semi-Civilized shows, the Moro display was collaborative, and the Moros exercised unexpected agency by negotiating how the display was both structured and interpreted by the public. Fairgoers were actively seeking an extraordinary experience. Exhibit organizers framed it, but ultimately the Moros provided it. And therein lay a tremendous amount of power.