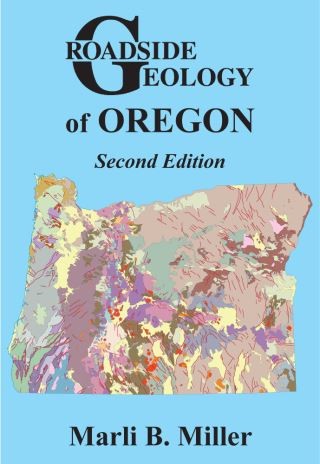 When the first edition of Roadside Geology of Oregon was published in 1978, it was revolutionary—the first book in a series designed to educate, inspire, and wow nongeologists. Back then, the implications of plate tectonic theory were only beginning to shape geologic research and discussion. Geologists hadn’t yet learned that Oregon’s Klamath and Blue Mountains were pieces of far-traveled island arcs and ocean basins that had been piled against the growing North American continent. Steaming volcanoes, ghost forests, recent landslides, and towns heated with geothermal energy attest to Oregon’s still-prominent position at the edge of an active tectonic plate.
Author, photographer, and geologist Marli Miller has written a completely new second edition based on the most up-to-date understanding of Oregon’s geology. Spectacular photographs showcase the state’s splendor while also helping readers understand geologic processes at work. Roadside Geology of Oregon, Second Edition, is a must-have for every Oregon resident, student, and rockhound.