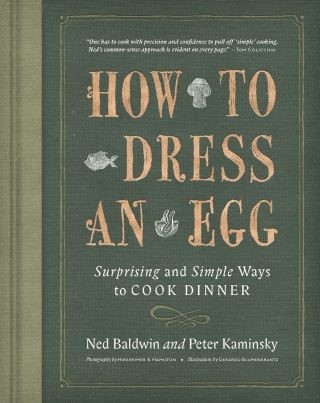 How to Dress an Egg

Ned Baldwin, the former chef of Prune, now chef-owner of New York City’s Houseman restaurant, and the noted food writer Peter Kaminsky share simple, maverick dishes and techniques that you can transform into a wealth of new recipes

Ned Baldwin:
NED BALDWIN earned an MA in sculpture from Yale and pursued a career in the visual arts and building, but the art and science of cooking fascinated him. He apprenticed with Alain Ducasse and Jean-Georges Vongerichten, and also worked with Tom Colicchio at Craft, before becoming Prune’s chef de cuisine. He is the owner of Houseman (the name means “house man’s food") in New York City, where he lives. He is a fisherman, hiker, cycler, traveler, and an eater.
PETER KAMINSKY has written seventeen cookbooks, including Seven Fires with Francis Mallmann. He lives in New York City.